ANOTHER BIG ATLAS CARD? Wow, like most bird species, time truly does fly! When one puts in a four- or five-day effort into a single pentad and atlas card, there must surely be a story behind it. A couple months late, but here is our story on trying to break the National Atlas card record… again.Some time back in the winter of 2019 a message comes through on my cell from Pieter Verster about how pentad 2520_3150 is delivering big time – in winter! An atlas card of 200 in winter got the ball rolling for an attempt to once again break the national atlas card record of 231 set in the Rooiwal Pentad back in November of 2018 (Read the story here). The pentad we set our sights on is one that over 150 atlasers have done and to date has 437 Full Protocol Cards and a species list of well over 350 – it is most well-known for includingCrocodile Bridge rest camp as well as Ngwenya Lodge! If you set out to try a big card you know that there are two things you need to do, spend time (what will feel like a lifetime) and explore every habitat possible (leave no stone un-turned as they say… or is it no tern un… never mind!). In a nutshell the reasons that we targeted this pentad were that we could access a decent portion of Kruger itself, much of the Crocodile River through various farm access and of course the farmland in the south with many productive farm dams.“Mpumalanga once held the atlas card record with an Mkhombo dam card of 217 but perhaps it was time for the lowveld proper to hold the record.”

We set off on the 26th of November 2019 and planned to start the bash the next morning before the sparrows started farting. We actually stayed outside the pentad (which was not ideal) and to our frustration flushed a Common Buttonquail about 200m outside the pentad. The first bird I logged was a Burchell’s Coucal at 04:00:46 – the challenge had begun. In our scouting time(including many a phone call to various farmers and landowners in the vicinity) we arranged very good access to various sites. This is crucial. A private woodland in the South West of the pentad proved to be one of our most productive spots here we added nocturnal species such as Spotted Thick-knee, African Barred Owlet, Southern White-faced Owl and Western Barn Owl (the latter two species here we only added on day 4). As well as diurnal species such as Eurasian Golden Oriole, Stierling’s Wren-warbler, Black-bellied Starling, Eastern Nicator,Black Cuckooshrike, Bearded Scrub-robin and Cinnamon-breasted Bunting. All these species have less than 5% reporting rate (RR) in the pentad. 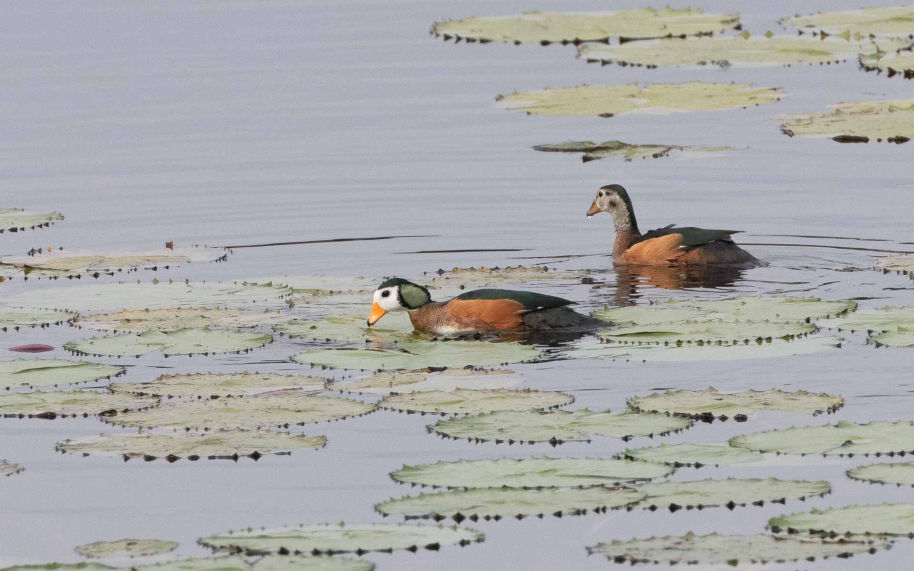 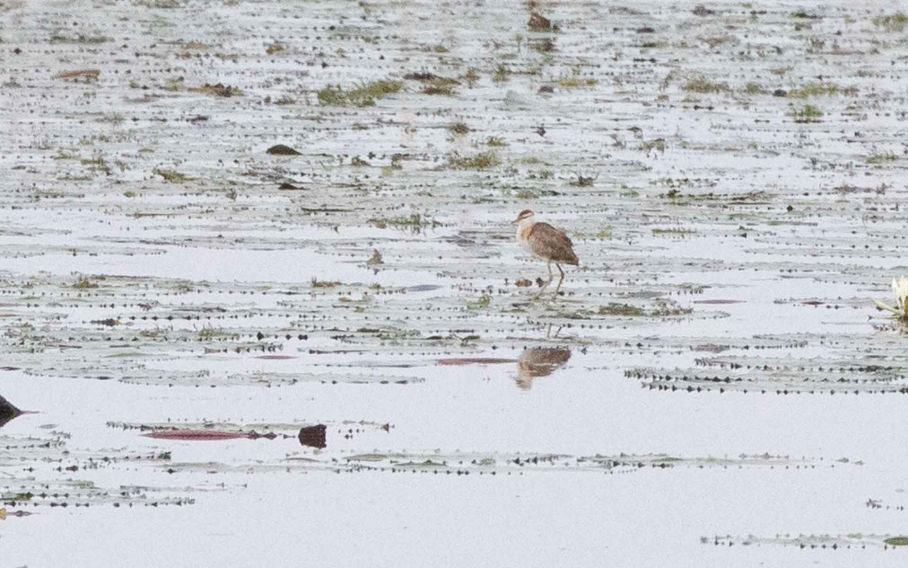 We shot off to bird some farmland and dams in the South and were richly rewarded: African Swamphen, African Pygmy-Goose (3x pairs), White-backed Duck and a single Lesser Jacana all of course, less than 2% Reporting Rate (RR). Bird number 100, Bronze Mannikin, came in at 06:41am and bird 150, Burchell’s Starling, the same at morning at 10:05. Craze birders that we are, we actually left the pentad on day 1 [I repeat, WE LEFT THE PENTAD] for exactly 25 hours to twitch the Sharp-tailed Sandpiper in Maputo! A couple Rosy-throated Longclaws and a few awesome waders and a 95 species Full Protocol Card were all we had to show for our efforts though – we dipped the Sharp-tailed Sandpiper. Entering back into the pentad felt like a serious relief – what did we miss we wondered. In the heat of the afternoon and after many efforts scouring all the large Ficus trees along the Crocodile River we finally managed to find the only Black-throated Wattle-eye pair in the pentad – the elation was awesome! We entered Kruger once again and added a decent number of the more common Kruger Park species as well as a few specials. A small family of Red-headed Finch were sighted along the main road and a Eurasian Hobby took us to 200 on the evening of day 3. We also thoroughly enjoyed a Serval busy hunting in the long grass alongside a main road near Marloth park – atlasing always brings about great surprises. 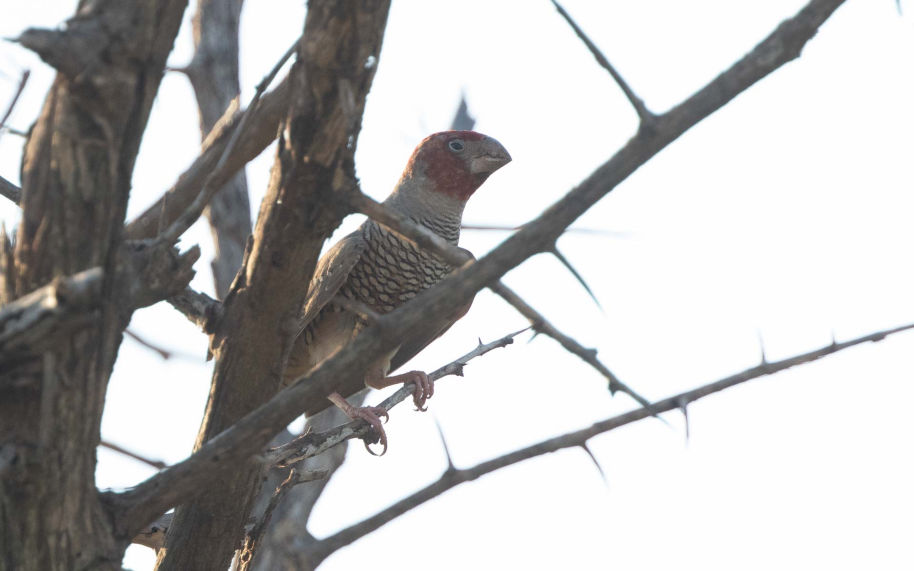 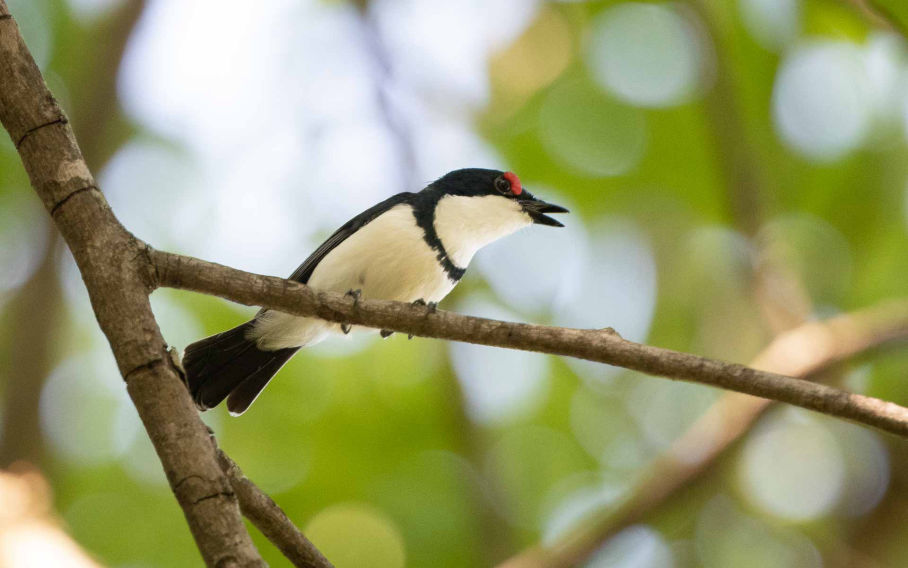 The morning of day 4 was excellent, we picked up Harlequin Quail (a strange sighting of a bird on the brick road in Ngwenya lodge), Black Heron, African Mourning Dove, Croaking Cisticola, Ruff, Holub’s Golden Weaver and Greater Striped Swallow. The afternoon we had our only sighting of the card of: Temminck’s Courser, Woolly-necked Stork, Marsh Sandpiper and Yellow-billed Kite. We equaled the previous atlas card record that evening with Southern White-faced Owl and broke the record at 19:01 that evening with a Western Barn Owl screeching overhead. We ended the card on a pretty massive 247 species after finally adding Marabou Stork, Cape Vulture and Southern Ground Hornbill in Kruger and Brown Snake Eagle and Western Osprey just outside Kruger.

Southern White-faced Owl - We got a fantastic visual of this Owl minutes before we picked up Western Barn Owl as our record breaking species, #232 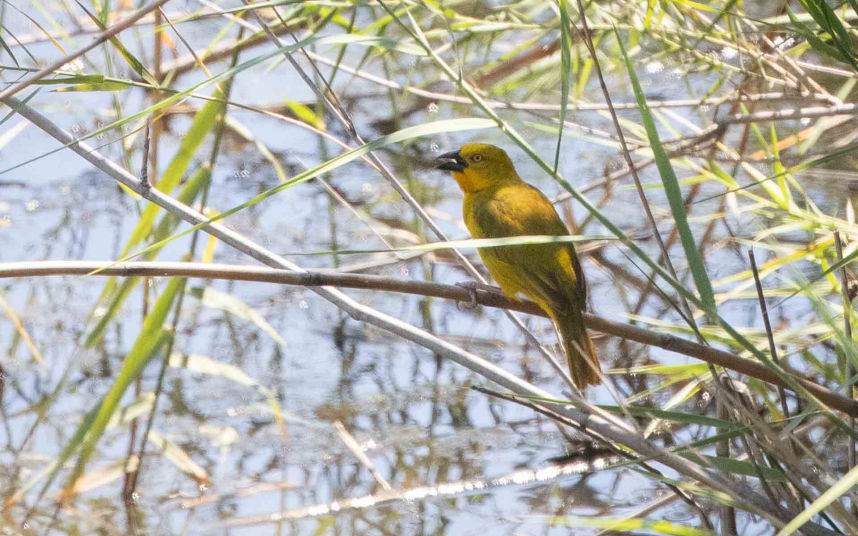 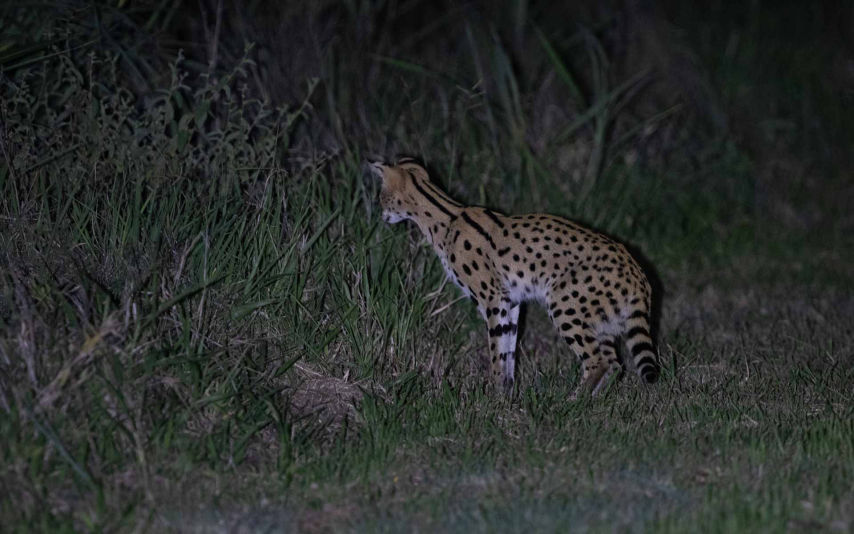 Serval on the hunt

Just as with previous big card efforts, half the battle is won before you step foot in the pentad. Well done to Pieter and the team on the hard work acquiring access into private farms, bringing a strong conservation message across to lodges and landowners. We also did a lot of work knowing exactly where we needed to target which species, knowing a pentads potential species is a great help too. We put in an amazing 58 hours of birding time and drove around 500km in the 9.23x8.39 km block over 4 days. Our biggest dips by RR% were African Openbill, Amethyst Sunbird, African Stonechat, Cape Wagtail, Fiery-necked Nightjar, White-headed Vulture, Yellow-bellied Greenbul and Yellow-fronted Tinkerbird. Some of these we know to have a winter movement into the region and some we suspect to be mostly mis-identified species. A big atlas card always produces a few Ouma rusks!

Thanks for taking time to read out story, There are always more birds!
Pieter and Janelle Verster, Eduard Teichardt and Jason Boyce.

HOME BACK TO JOURNAL